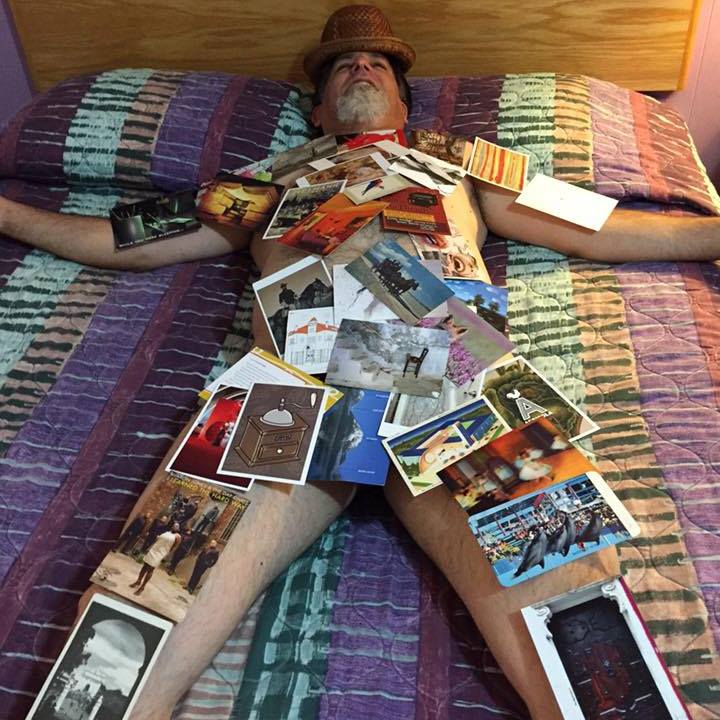 Paul covered in poetry postcards he received in 2015.

Year 9 of this fest was the most difficult as an administrator and the most satisfying for me as a participant. The administration was tough because of some folks complaining about the addition of a modest $10 fee for registration. Ultimately, anything you have to pay for in a capitalist culture is either worth the amount someone is asking, or it is not, but with poetry, which is part of the gift economy, it gets more dicey. Since I’ve covered that extensively, let me make this post about my experience of the fest this year.

I had a practice card and then wrote 32 poems using a Joanne Kyger quote as an epigraph and ended with one collage poem as an homage to Judy Kleinberg, who has perfected the mode. (See this link.) The immersion in Kyger’s work created another project that involves poems from her latest book On Time, but since I am only thirty percent finished with that project, I’ll wait a while before posting about it. I had hoped to write more, especially to Group Seven, which had a limited amount of participants, but I like the tradition of ending in August and writing an afterword on September 1. I did this for years as part of the August 3:15 Experiment and continue with the APPF. 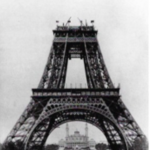 I used a Daphne Marlatt quote to launch the poem. This comes out of a walk in the neighborhood and refers to Lake Washington ((Xacuabš) in the native language Lushootseed) and combines what my late Indian friend Beaver Chief called “Indian Meditation” – that is letting yourself get entranced looking at water. In this case it was more of the reflected sunlight on water, but it was a quintessentially summer moment in Seattle and ponders the consciousness of things like a body of water. 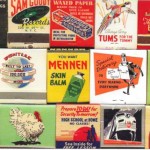 In the first “official” card of the season, I get right into the Buddhism of Kyger with her quote used as an epigraph. In the Subud tradition, one connects with the Divine by surrendering thoughts and movements to that life force through the spiritual exercise called “Latihan Kejiwaan.” That the Indonesian word for soul “jiwa” is a part of this phrase, one can see the link between the Keatsian notion of earth being a “veil of soul-making” and the Indomesian roots of Subud. That is contrasted with the Mad Men-era card which features products and how language is used by three people, my poet friend Amalio, my daughter Ella and Kyger. 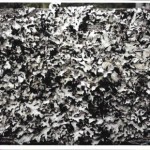 One of my own 2014 photographs on a card I had printed at FedEx was the right card to start a card a day or so after taking a workshop on urban lichens. Add to that the fire in a rainforest in the Olympic Mountains, where I was rescued 15 years ago, and you have some potent material with which to work. 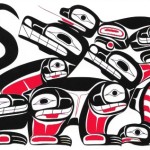 The largest category of cards I send out, in terms of the image, feature Coastal Salish art. I think this is one of the world’s most potent artistic traditions, on a par with any movement at any time in history, and in this case there is an ekphrastic sense, or at least a reference to the art on the front of the card. The new glacier reference in the poem is about Crater Glacier, or Yulutson Glacier, which was born after the 1980 eruption of Mt. St. Helens. See: https://en.wikipedia.org/wiki/Crater_Glacier Can there be hope for our biosphere that, while most glaciers on the planet are melting, there are some baby glaciers trying to pick up some of the cooling slack. ACD is without question in my mind the most critical issue for any poet on this planet. 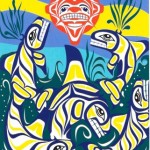 I have messed around before with anagrams and I love some of the word combinations that are created as a result of rearranging the letters in someone’s name. This year I have written a lot of poems that utilize anagrams to honor a person on their birthday. (Facebook is good about reminding us of birthdays.) Sometimes the anagrams are not flattering and the recipient is less-than-pleased about alternative combinations, but since one anagram of Paul Everett Nelson is Venereal Pole Stunt I think I can be given a break and hope the subject of this postcard forgives me. Another Salish Art card. 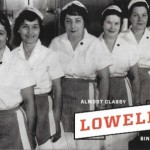 This poem was inspired by something said in a talk given by Muhammad Subuh Sumohadiwidjojo, the man who founded the worldwide Subud spiritual community. I have been a member since 2004. The notion expressed in this card makes me feel better (or explains) why I often am the person laughing most loudly at my own jokes. 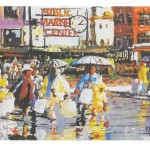 This one continues the “being as comedian” thread from the last poem, makes a reference to a direction in a prompt I saw online and alludes to some of the more out of line kvetching brought on by the implementation of a fee for the fest in 2015.

This poem reminds me of the on and off dialog I have been having with a Canadian poet who is down on post-modernism because much of it is: “gibberish” in his view, but whose own work is clichéd and sentimental. How would one translate whale speak into a poem. It probably would not rhyme. More Salish art here. 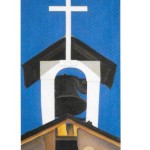 A Georgia O’Keeffe card and great epigraph from Joanne Kyger, the composition of which affected the content. (Wait til the ink dries!) 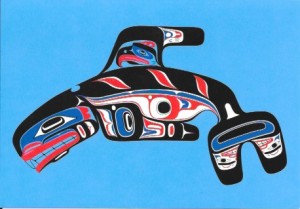 More Salish art and a poem resulting from what the postcard fest instructions suggested since year 1, that is “something of the here and now” should/could get into the poem. That’s what postcards are after all, no? My ongoing battle with dehydration and the fest as respite from life in pre-crash USAmerican empire are also recurring themes of the work. 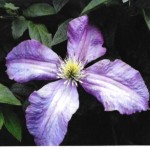 Again a great Kyger quote which makes me think of field poetics, a subject her friend Robert Duncan had a thing or two to say about. Also a reference to Walter Palmer, the Minnesota dentist who recently returned to work. The image was from my 2014 day-long photo binge of sights in the Hillman City/Seward Park neighborhood, many of which I had turned into postcards. 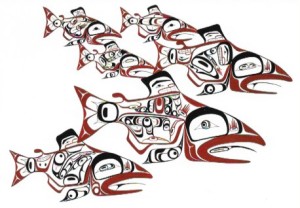 More Salish art (one of my favorite cards) and a little piece of Wanda Coleman’s fire, in which you don’t eliminate clichés, per se, but “twist” them. 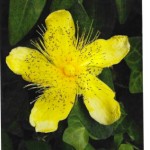 Another one of my 2014 photographs turned into postcard, this one begins the summer-long fascination with chicory. Once identified (thank you Carol Blackbird Edson), I began to eat as many of the petals as I could find and also found chicory showing up in the OTHER series of poems I began writing during the APPF, some of which I’ve been reading at open mics and posting elsewhere online. 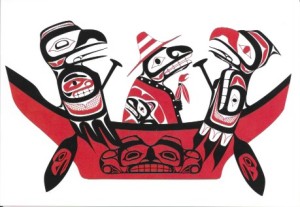 More Salish art and a reference to yet another plant species identified this summer. It really DOES smell like peanut butter, but beards are entirely different, and require a higher degree of hygiene effort that most other hair categories. 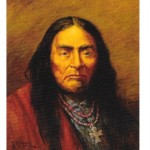 A photo of the Chief after whom the city I live in is named. Is there another major American city that so directly honors its indigenous heritage? If yes, comment below. The poem also riffs off the Chief’s famous speech, or the one purportedly his. 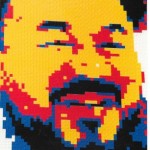 It seems as if “demons” or the “devil” is a thread that ran through this year’s fest for me. “Nafsu” is a related Indonesian word that might better be better translated as “lower forces.” Not demonic, per se, but required to be working in a proper hierarchy for best results in an effort to become more human. 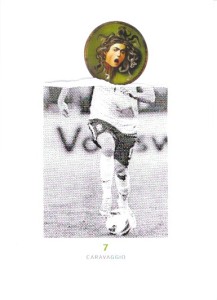 A card from the bunch I got in 2014 created by the amazing Mexican artist German Montalvo with reference to a Sudanese migrant’s courageous quest for freedom. That the European migrant crisis was part of what happened in summer 2015 and says so much about the world in which we live, makes it a natural subject to make an appearance in the poems.

Written in the heat of the recent Bernus Interruptus, which I witnessed and which my report of (I think) resulted in the loss of one postcard participant. 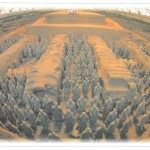 For some reason I segued into a memory from my rock n roll DJ days in Appleton, WI (WAPL). I was a member of the Leininkugel Club and required to have at least one cold Leinie’s in the fridge at all times. My first wife had to show them the bottle, as I did mornings and had an early bedtime, but I was not yet asleep and glad I passed the test.

Unlike Chicory, I’ve been eating fennel the last couple of summers. The intensity of this herb is astounding and a wonderful taste that one gets in Cascadia summer. I heard it grows wild north of San Francisco, as we recently saw aside Highway 1 on the way to Stinson Beach. And to think this card was going up the coast about 1,000 miles. From Stinson Beach anyway. 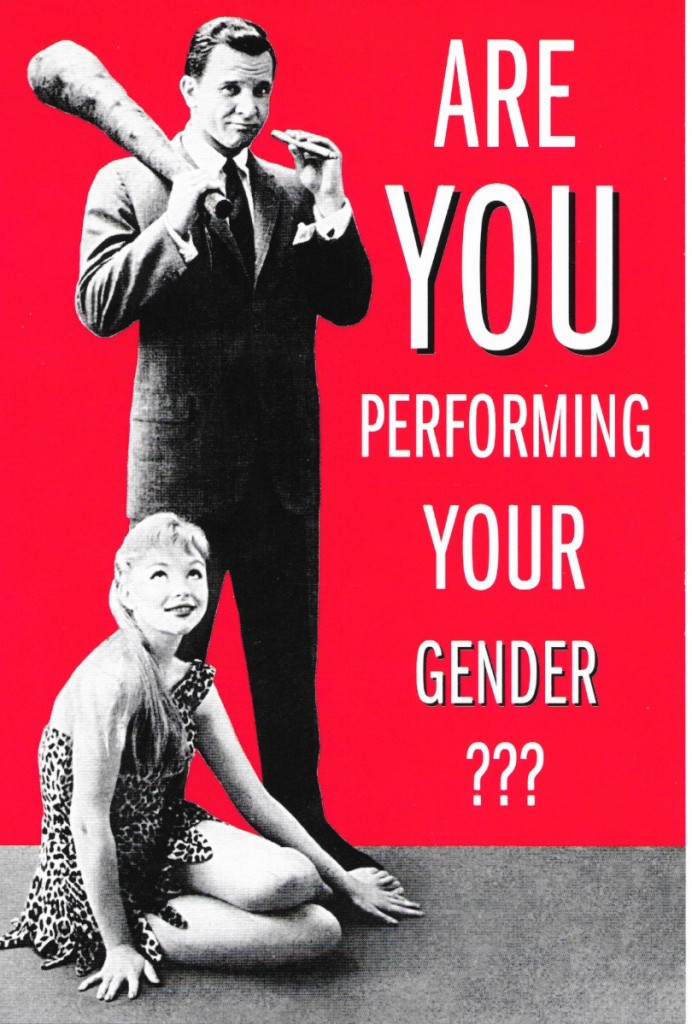 A paean (sort-of) to our gender-shifting times. As a man who has half-custody of a four year old, cooks and keeps a pretty clean house, the strict gender roles have never been a huge consideration for me, but a lot of folks are going to have difficulty dealing with what the kids call “the new normal.” Click on the link for video of me reading the poem.

More demons, another memory of the 2014 Subud World Congress in Puebla, Mexico, and an illusion to los feos americanos.

One bummer about Seattle August is the “tradition” of the Blue Angels. Others have written more eloquently about the need to stop this pathetic display of militarism. I am with them and the people on the other end of “our” rockets. Another German Montalvo card. 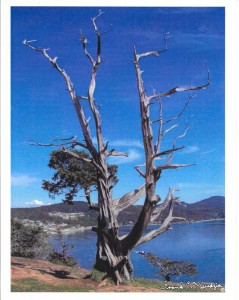 If you believe in Traditional Chinese Medicine, you know the lung/heart meridian is related to grief and that I spent the day after a wedding at the Spring Street Center picking up cigarette butts might say something about the gathered’s attitudes toward holy matrimony.

Another Salish Art card and one I’ve used before. We miss our cats, not that they would have been able to ward off attic rats.

ANOTHER devil reference and an image of one to boot. I love how the neighbors across the street use a pole with netting at the end to harvest plums.

One of the cards I brought back from 2014’s trip to Wisconsin.

Directly inspired by Arthur Tulee’s poem, this one also has a nod to one of my favorite American Sentences.

Another Georgia O’Keeffe image, this one as prayer for a postcarder in the middle of summer wildfire hell. 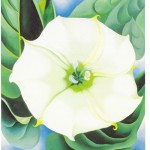 Another Georgia O’Keeffe image and one of the shortest 2015 postcard poems mostly because of the glossy stock and the difficulty in the actual writing of the poem. Ugh! Also a reference to an auspicious astrological occasion which affects your friendly neighborhood Virgos. (As if there were any other kind.) 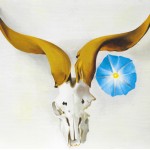 Yet another Georgia O’Keeffe image and another reference to one of the more grisly events in the summer 2015 European refugee crisis. May all sentient beings find a safe place. 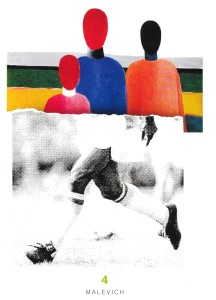 A ransom note postcard and homage to the recipient who is a master of such poems, Judy Kleinberg. I could not think of a better way to go out. Though I wanted to send cards to all of the last group, Group 7, life intercepted my plans and you’ll see what I mean when you look at the postcard list for 2016 and see my new address. I can’t begin to express my gratitude to all the postcard participants, to the hopping APPF Facebook page, to Joanne Kyger, all the artists whose work was represented on postcards, Lana Ayers, Brendan McBreen and all the other people who made this fest what it is today. Thank you. Year Ten next year promises to be an awesome experience again helping us to savor the best month of summer, better master the art of writing spontaneously and moving us a little closer toward community. Inshallah.