Although the August Poetry Postcard Fest is over (it IS September after all) cards I sent out on the 31st have probably not arrived at their final destination and the APPF Facebook group is still crankin’ with people posting about not yet having sent all their cards. Others are continuing to send out postcard poems. Some comments from the FB group: L. Lisa Lawrence: “Yay for an extended August!” Carol Keslar: “It’s over? ! Sort of…”

Here is my haul as of September 4: 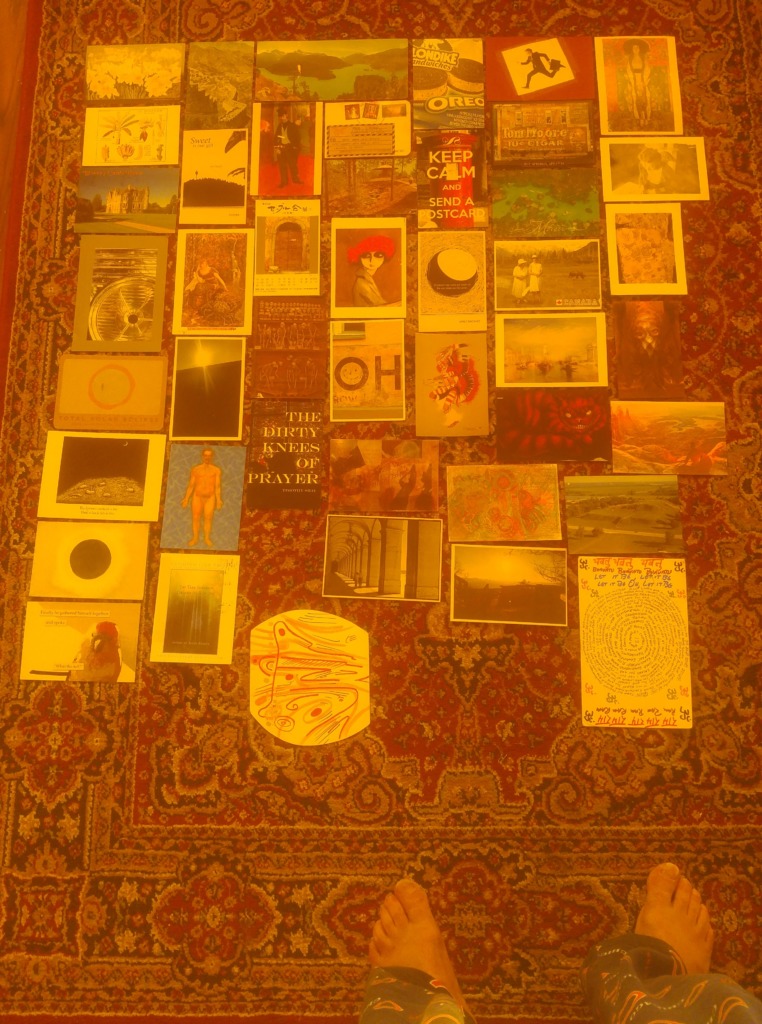 When you receive 49 cards, like I do, it feels a little gluttonous. I know I am the guy who conceived of the fest (with the help of Lana Ayers) and the guy who runs it, but it’s a little overwhelming. (In a good way.) Were I not producing a major literary festival in October and assisting one happening this week, I could probably write something about each card, but the thought of that is overwhelming, combined with the fact that I am continuing the fest in my own way and using the form to explore the concept of seriality. More on that in a moment. 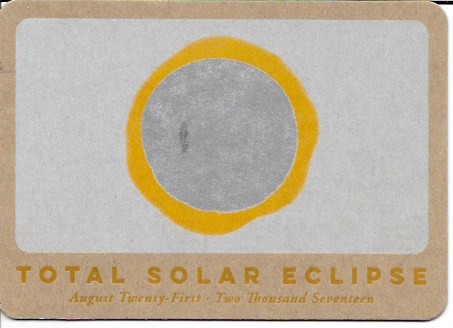 One solstice card (of a few) had an American Sentence that likened the August 21 event to a “traffic jam at a celestial intersection.” Thank you Abhaya Thomas of Portland. That Abhaya is writing a series of such sentences is important.

L. Swartz had a poem with a preface: “Paul, this is the real thing:” Not sure if she meant the card, or the love expressed in the poem with the touching ending: She says, I have complexities in / odor, like cat food mixed with / cigarette smoke. I kiss her to / shut her up. (L’s bold.)

Jessie Lyle of Whidbey Island, WA had a hologram card (which can’t be replicated by scan) whose image relates to her own health challenges and it is intimate to have something of a poet’s personal mythology be revealed to you when you read a card sent to you. I love how the image and the content mesh and I think my best cards have that harmony.

And Stanley Sabre of New Mexico got carried away and there’s nothing wrong with that: 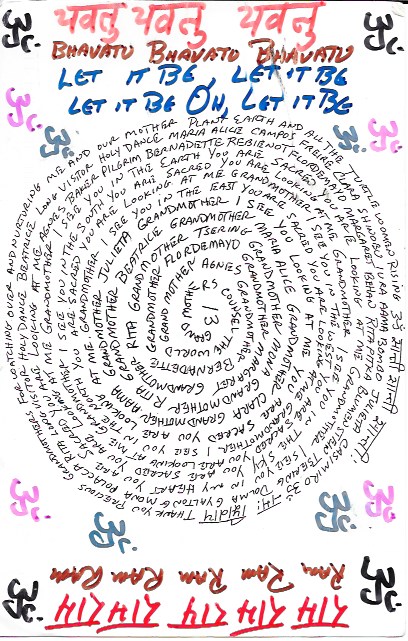 Stanley had an eclipse stamp, which I wish I learned about earlier. I had a few cards with those stamps.

When the fest started in 2007, I had a sense of wanting people to have the experience of an open form. Allowing the unknown into the poem and learning how to trust it even if one does not understand the meaning is a key to the best poetry, I think. Sam Hamill once told me: “How can you expect anyone to be surprised by what you write if you’re not surprised  by what you write?” But I go back over and over to what Nate Mackey told me in an interview published (in Amerarcana: A Bird & Beckett Review) in 2013, and conducted in 2012 about seriality. Many postcard poets were exploring that notion and I’ll end with this Mackey interview excerpt and urge poets to experiment with the experience Mackey talks about, as there is gold for people willing to allow themselves to be a little more vulnerable in their own process of composition:

PEN: What is the appeal of the serial form? What attracts you to it?

NM: The fact that things remain open. It’s an open form. The well- wrought urn aesthetic, where the poem is this discrete, self-contained accomplishment in which everything fits together and works together in this well-oiled, machine-like way, imposes a certain sense of closure on each poem that I find constricting and found constricting. I wanted there to be the possibility of things coming into the poem that were not necessarily resolved in that poem, that were not necessarily pursued to their fullest or most exhaustive sense in the poem. I wanted things to come into the poem that would have a life beyond that particular poem and that would become part of an exploration that I’d be involved in in my writing. The appeal of the serial poem is that it allows that. It’s not so much a matter of it’s there and it’s done, but that again and again, again and again, again and again, you come back to certain concerns, certain motifs, certain figures. In a sense, there’s the freedom of not feeling that one has been definitive, that one has closed things up, that one has shut the door on further exploration. That’s been a real driving force in a lot of the work that’s been important to me and it’s become, I think, a feature of my work as well.

PEN: It sounds like the notion of negative capability, rich with that.

NM: Yes. To be in areas that you’re feeling out, you’re groping your way, you’re feeling your way. You have a bit of light, you go into the poem with some sense of what you’re doing and what you wish to say, but you also leave yourself open to the information you get from the poem itself in the act of writing and the act of exploring and thinking about writing. You find out what the work might want to say that you hadn’t necessarily intended to say. So it’s kind of a dialogue with the work, more of a dialogue with the work than a certain other model of writing might propose, which is that you are in command, you are in control and you simply have to find the technical means of executing your will.

PEN: Which means, on a couple of different levels, you are marginalizing yourself out of mainstream U.S. poetry, which likes that contained poem, something very neat that it can put on one page of an anthology and that has a nice little compact meaning that we can use an objective correlative sense to figure out what it means and then kind of consume it and move on.

NM: Yes, it’s a little different from that. It’s on the margins of that. It’s doing something else. It wants to make the work a kind of ongoing companion to one’s life. There’s a back and forth between the life and the work, the writing and where you find yourself at any particular time. It’s very much about process. It’s very much about revisitation, bringing some material forward, altering it in ways. Some material drops off by the wayside, but there is more of a sense of openness and of dynamics and kinetics, as opposed to some closure and sense of stasis having been arrived at.