“All I ever wanted was to reach out and touch another human being not just with my hands but with my heart.” 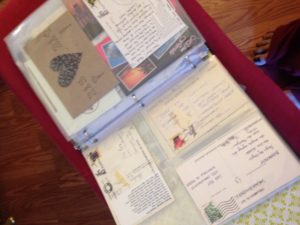 Like a lot of writers, I’m a bit of a loner and more than a bit of a night owl. Nighttime is comfortable, because I can be alone and listen to the world; it’s the time when I can most easily hear the words forming in my head. But sometimes, the night becomes a big, lonely place. It’s a deep loneliness – and it doesn’t matter whether I’m in San Francisco, on Interstate 80 cutting across Nebraska, the streets of Calcutta, or a tiny flat in Cologne. It’s not about being away from people; it’s about suddenly feeling unsure that you can truly share yourself with another person. You can be married, or live in a group home, or have children, or share your life with many non-human animals and still suddenly feel like you have a bubble of glass around you. You can see everything – but you can’t hear anyone speak.

About four years ago, I experienced an extended period of such disconnectedness – of feeling like I was just brushing shoulders with other living beings instead of seeing them completely and wholly. It was damaging my relationships, and there was a big aching gap where writing should have been. In passing, a friend told me that she was “doing this thing” called the August Poetry Postcard Festival.  In the Festival, your name and address was placed on a list with many (100s) of other poets. Each of you would write a poem on a postcard each day and send it to the next person on the list. Eventually each of the poets would have written and received 31 poems, from people they’d never met and might never meet in person.

My friend’s timing was one of those pieces of serendipity that remind me that I’m a human animal and not just a thinking machine: sending a postcard every day to someone I probably didn’t know would let me reach out to other people with my most immediate thoughts — the thoughts I was having trouble hearing —and to be the recipient of a moment of someone’s truth.

As David Sherwin says so eloquently (https://changeorder.typepad.com/weblog/2010/08/sending-postcards-to-strangers.html) , committing to writing every day — sending an arrow straight to your own heart (because 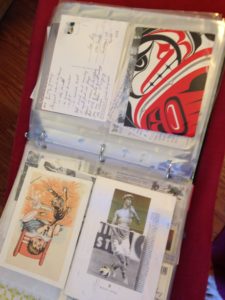 you don’t have time to overthink your words) — lets the words and the feelings connect up on that little piece of cardstock. Paradoxically, the constraints of time and space free you from a kind of perfectionism that so many artists (yes, me too) suffer from. And whatever happens — well, the words are out in space to touch someone else.  And someone is sending you an essential moment of themselves – out of the goodness of their hearts, out of a willingness to commit to a piece of deep honesty and trust — which you get to hold in your hands.

This will be my fourth year of participating in the Fest, and I can’t describe how much I’m looking forward to August. Every day from around the end of July to sometime in September, I will have a touch of someone else’s mind in the moment that they set their hand to paper.

That first August Fest was so fulfilling for me, as a person and as a writer, that it motivated me to offer my participation in other 30-poems-in-30-days events (most recently, the Tupelo Press 30/30 project). I enjoy them all, and they give me that same sense of freedom and honesty, as well as keeping me in touch with my inner creative spirit. But every year I also return to the August Postcard Poetry Fest, because unlike most of these events, it’s a conversation – some people in the Fest continue the conversation  year-round — between people who understand the inherent loneliness of the human condition and the need to find moments of connection within it.  I encourage you to try it – this month of getting to know some interesting people, including yourself.

The photo above is one of the books in which I keep the postcards I have received over the past years – I’ve tried to keep all of them. When I’m standing in the yard with my dog (because the dog and cats stay awake with me if I’m up late writing) and I’m feeling stricken by that sense of awesome loneliness that one gets from looking up at the sky at 2 a.m., I go back inside, curl up on the couch with one of the books, and look through it — touching, briefly, the hearts of the friends I’ve never met.