I am so envious of these four chapbooks and delighted they were gifts recently given to me. All from Cascadians and all quite worth while. Wikipedia (by way of the O.E.D.) says: “Chapbook is first attested in English in 1824, and seems to derive from the word for the itinerant salesmen who would sell such books: chapman. The first element of chapman comes in turn from Old English cēap (‘barter, business, dealing’).” Wish I had a couple of chapbooks this inspired. And by inspiration, I mean the whole package, the cover, the binding, the design, the writing. Wow. 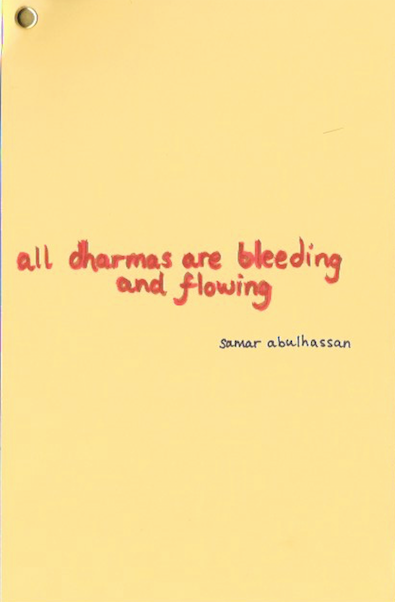 Samar Albulhassan has been a teacher at Seattle Arts and Lectures’ Writers in the Schools Program for the past seven years, and continues to teach writing to teens and adults at the Richard Hugo House. Her new chapbook is: “all dharmas are bleeding and flowing.” In Sanskrit one interpretation of the word “dharma” is to hold; to maintain. Law is a word also associated with this interpretation. And so to understand a law as bleeding and flowing is an especially potent notion for our time where uncertainty is seen as a weakness, when it is often the sign of an ability to understand and consider all possibilities. That this dharma would also be bleeding, suggests it is alive; has sentience.

The book comes out of a workshop on erasure poems conducted by Matthea Harvey and from mixing bits of texts from three main sources: Thich Naht Hahn‘s Old Path, White Clouds, the Wim Wenders film Wings of Desire and the Helene Cixous book The Third Body. What’s left after erasing is a pastiche that reveals some very inspired phrases which work very well as poems almost all of the time.

at last an inner light

I accept that suffering is a truth.

How could I ever stop

and a poem that ends: 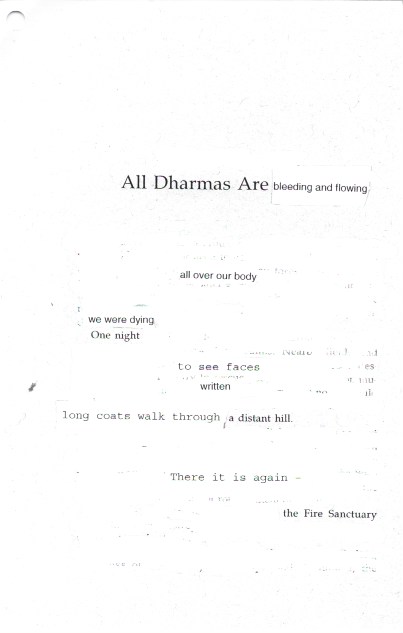 The way the lines are pasted in and the palimpsest effect is extraordinary as well leaving a ghostly/spooky vibe that (because of the text and the inferences) does not evoke creepiness, but an inspired otherworldliness which is not an easy thing to do.

The split pin that keeps this little book together is not ideal and I can see trouble ahead should the book not be handled with care, as sometimes happens when moving.

Though the energy of the poems (for me) tends to peak about 3/4ths of the way through the book, this combination of use of language and spiritual inference is a very potent combination and portends very good things from this poet. 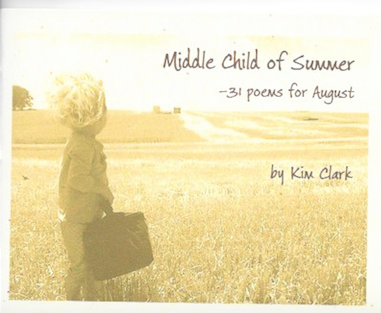 Kim Clark is a Cedar, BC, (Nanaimo) poet whom I first met at the (sadly now defunct) Victoria School of Writing Summer School. She was part of a week-long workshop with master Cascadia poet George Bowering. Her new chapbook Middle Child of Summer was beautifully published by Leaf Press and hand-bound with thread. And the notion of August being a middle child is an inspired perception and one that I wish I had thought of!

The poems were all written for the August Poetry Postcard Fest which I had a hand in starting in 2007, so are all short (because they had to fit on a postcard) are pithy and are not afraid to see the beauty in a month that is “sandwiched [on stale rye] / between peachy ambition / and the spoilage of bouncing / apples.”

Geography, what you do to me.

This is a great illustration of how the abstractions have to be earned because there is the payoff of the very tangible onion bouquet and there are numerous occasions like this one in the 31 poems. (One for each August day.) There is an “Outrageous cheddar halfmoon” and other very original uses of language, but also clichés like “all hell broke loose” and “no tomorrow” and “stops us in our tracks” but given that these poems were all written spontaneously onto postcards, you can either cut her some slack or appreciate that she published the poems with all of their warts. (Or are these liver spots?) www.leafpress.ca 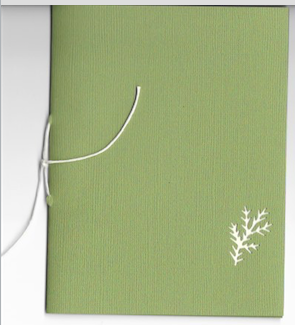 Lessons from the I Ching: For The Mountain, Lheklhukxayten (The Place to Peel Arbutus Trees)

Heidi Greco’s Lessons from the I Ching: For the Mountain, Lheklhukxayten (The place to peel Arbutus trees) is a simple, but elegant hand-made chapbook bound by thread and written to benefit the Burnaby Mountain Defense Fund. Greco participated in the first two Cascadia Poetry Festivals and at the first, in Columbia City in 2012, was part of the all-women eco-poetics panel. You can get the depth of eco-poetics, at least her version of it, with just the title of the book. Called Arbutus trees in Canada, they are Madrones south of the 49th and anyone who loves these trees loves to peel them, as they have a kind of skin that peels right off and often reveals tan lines. (Would love to see books made out of paper made from this.) That she would include the indigenous name for the mountain seems an almost necessary part of any eco-poetics project in Cascadia and for any poet who desires a deeper connection with place. After all, indigenous people were the last folks to have an authentic culture in this part of the world, as what the settlers brought with them is not earth-based, a huge part of our problem on this continent. Greco uses the I-Ching to illustrate the protests against Kinder Morgan’s efforts to create a pipeline that would have run through public land on Burnaby Mountain in B.C., not far from where she lives. Notions like K’un / The Receptive are about devotion and the earth, so seems a natural for the narrative building here.

The book is a response to (& benefit for) the protests and works as a tool for sustaining the resolve of protesters, which must have worked, because the pipeline-building efforts seem to have stopped for now. There is a very strong sense of place related here by someone who has hiked these woods with children and engaged in a wide variety of activities:

This is the mountain where I knew the trails
spoke to ancient conifers, planted new trees
made outlandish love to you, my back against
the rough embrace of bark.

The trees likely prefer this to hugging, but make your own call. Alternating I-Ching lines with her narrative of support for the protestors, there is a good balance of each. Because of the intention to create something of support, quasi-political and obviously on the side of the ecosystem and protesters, the aesthetic bandwidth is more narrow than something that might have been written just to chronicle the event and this sometimes feels rah-rah, but it’s for the right team, her instincts are spot on (as evidenced by the indigenous reference) and the book is beautiful. May her team prevail. 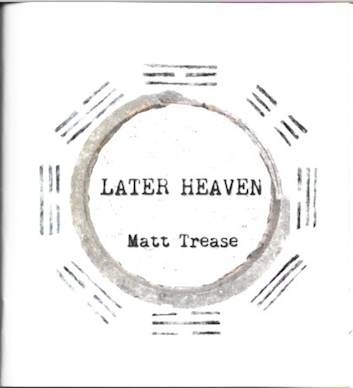 Later Heaven by Matt Trease (another postcard fest participant and Seattle resident) also uses the I-Ching, but this time more in the way of John Cage, who used the divination method to construct compositions. Feng Shui principles were used to order the material gathered through divination, a more structured approach than Albulhassan’s effort, but the result is along the lines of Steve Reich rather than John Cage. It’s repetitive and challenging and we’re privy to the process used. It can be quite interesting when the lines that emerge from such a process are:

That “percussion grenade” and other odd/inspired phrases return in a slightly different way each time, and so the ordering, while a lot more let’s say disruptive than a typical narrative, feels more like how life actually happens. Events in our lives often have echoes of the past, usually linked to our personal myth and returning at unexpected intervals as these phrases do with Trease in this book. It is that kind of experience that the best poetry can give us, allow us to transcend the “normal” which is a difficult task to do skillfully. Were I to critique, I would have preferred more tangible images had been chosen from the source texts, but often people employ these processes quite strictly and that may have been the case with Trease. Either way, I am on the side of the poem that tries do something different, event if the results are uneven.

All these chapbooks, as I mentioned, are beautiful and well-worth owning. Often chapbooks are a nice way to get some dough into a poet’s pocket and we all know someone who is chosen by those often benevolent forces can always use some dough. They always give you a taste of what the poet’s up to and, if inspired, you can dig deeper into that person’s work. That there is a bit of each poet’s soul in these books is the huge common thread. This is no small task in this era where what is considered innovative is often gimmicky.  These chapbooks reflect how each poet lives a life of poetry and I am honored to have them in my collection.