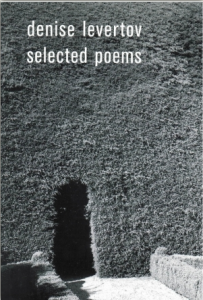 As I have mentioned in previous posts, I used epigraphs by Denise Levertov for all my postcard poems in 2014, and deepened my appreciation for her gesture. I can see why she ended up in Cascadia, with her fierce commitment to peace and justice and her love for the natural world. That she ended up becoming more religious in her final years is not something that inspires me, because I think we need a direct experience of the divine and not one necessarily that comes from books (no matter how holy) or sermons. Sermons are often efforts to convince, which is the main reason people often use that word sermon in the pejorative. Experience requires no convincing. Experience first, explanation afterward or “I’d rather be a servant of the gods than a slave to philosophers” as a parent told me at our pre-school potluck last week.

A couple of Levertov poems early in the 2002 paperback edition of her Selected Poems served as prompts for me. I had remembered that she had an ancestor who was said to have understood the language of birds, which fascinated me and which I saw as being akin to a shamanic act. As I began to re-read the book, I found the poem Illustrious Ancestors, which has the lines:

Later in the poem she closes with the notion of wanting to use speech as direct as birds in her own poems, something reflected by the epigraph I chose for the postcard poem I wrote on August 5, 2024, from Puebla, Mexico. See below.

I would quote another Levertov “animal poem” later in the month as I made my way through Selected Poems and will quote the context when I post that poem. Even though I am not Catholic and not religious, I can’t help but think of the parallels between Levertov late in her life and the patron saint of animals and the environment, St. Francis of Assisi, but fleshing that connection out is the work of someone else. 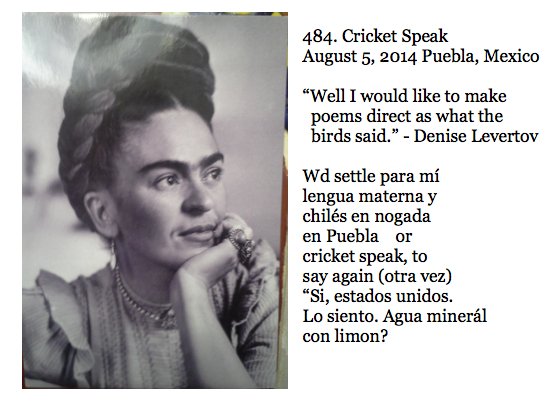