This poem continues from the last postcard poem and Levertov’s notion of the acts that serve as counterstrokes to the ills of the world. She would have been writing about WWII, a war in which she served as nurse so saw the atrocities first hand. She would also be an outspoken opponent of the Vietnam War and would lose a key friendship with Robert Duncan over their differences of how to respond to the U.S. atrocities in Vietnam. That we’re again dealing with the Middle East and specifically the atrocities being committed by Israel and Hamas of course shows up in the poems from this year’s August Poetry Postcard Fest. The life of a peacemaker can be deceiving. The Lorine Faith in the poem is Lorine Faith Niedecker, referenced in the postcard image, a woman who also lived her life as a counter stroke to the prevailing cultural wisdom and continues to serve as an example to me and to my praxis. 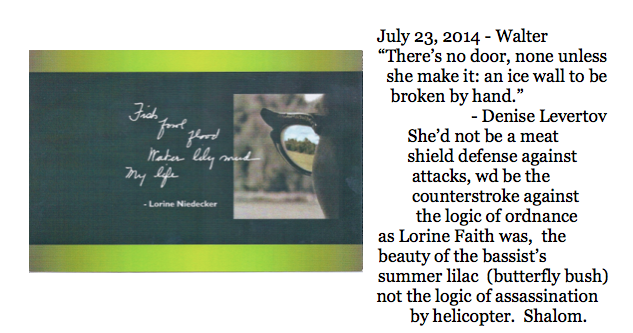