I was preparing for my reading tonight at the Five Alarms Lit Crawl in Greenwood. (Gratitud y Gracias to Aaron Kokorowski, Greg Bem, Graham Isaac, Bryan Miller & other organizers.) The Four Hoarse Men will be performing and I have a slot myself as well. 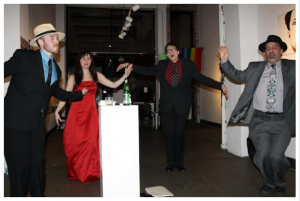 What to read? I have seven large minutes to end the thing. I feel it critical to show some range whenever I read more than one poem and American Sentences are mostly accessible and usually well-received. OK, some of those (with a surprise tonight.)

Then perhaps something from A Time Before Slaughter. The poem Tuscan Sonnet Ring can be done in about 6 or 7 minutes and has a trajectory that builds to an ending that I dig and has worked before on such occasions. I remember one of the Red Sky Reunions where it went over well. But, that’s old. Goes back to 2005 and, though I have only about 6 more copies of my book to sell, I’ll sell them before too long.

So, new stuff. Sure. I had sent off some poems to The Capilano Review from my new series Haibun de la Serna, a series of 99 Haibun written after the ne0baroque poet. So far I have written 68 and was hoping to have them done this year, but the baby has other ideas. Some of these haibun are also about Cascadia in one way or another, so fit in with Pig War and Other Songs of Cascadia. The Pig War poems are mostly too long, so will have to wait for their debut.

So, looking through the mac, I realized a recent poem was accepted by Planet Earth Poetry Anthology, so that sounds like it’d be a good poem to read. It’s about Kurt Cobain after a visit to the new memorial in Aberdeen. I hope to attend the October anthology launch in Victoria. I pass by the Kurt Cobain memorial bench daily.

Then I thought of the postcard poems! I’d written 30 last year and hardly looked at ’em. Many of them I wrote in China, but I wrote another to another, less known, Seattle icon. That’s the thing about the August Poetry Postcard Project. If someone you appreciated dies in August, there will likely be a poem out of it. By the way, the deadline is July 25 to get hooked up with this year’s postcard deal.

So, as it stands now, start with American Sentences and a surprise wrinkle with them. Do a haibun, the Kurt Cobain poem and then a postcard poem. Of course, this is all subject to change and I’ll bring along at least three books of mine from which to choose. Hope to see you in Greenwood tonight.